Clicking on the button below will uncommittedly access a simulation of the work quality assessment survey.
You will then be asked for your company name and an email address to send the sign-in link to.
If you represent a company and are interested in starting the official evaluation process go to the dedicated section.

The Ethicjobs scientific survey was built internally by the project team during The Startup Training promoted by Bocconi University in Milan; and was further developed together with professors and researchers at the Alma Mater Studiorum in Bologna and supported by experts in the field.

In order to select the areas investigated, we have abided by the directives of the European Parliament’s Commission on Employment and Social Affairs, in line with the Framework Regulation on the Quality, Safety and Health of Workers (EC) No.2062/94 and Directives Subsequent.

Below are the 5 macro areas that we go to investigate, in turn declined in 25 micro areas and analyzed by about 75 questions. The employees, whom make up the strength of the company, anonymously, and in a controlled fashion, respond electronically to the survey, providing us with the data that is processed by our algorithms. 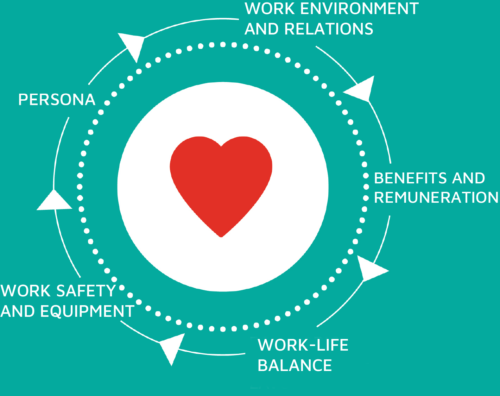 Ethicjobs was born and acts on the side of workers to make the labour market more ethical and attentive to the needs of all. To ensure the anonymity of respondents, all links to the questionnaire will be unique, untracked and visible exclusively to our team.
Ethicjobs guarantees the protection of shared data under GDPR (General Data Protection Regulation – EUROPEAN Regulation 2016/679).